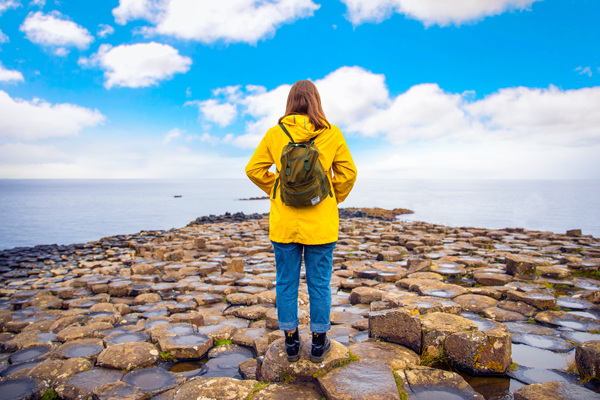 The Giants Causeway is the youngest of rock formations in Ireland. Formed 60 million years ago by volcanic lava flow. It is hard to imagine that 60 million years ago the climate in Ireland was roasting hot. Volcanic lava flowed into a river bed near here. This lava cooled slowly to form Basalt. Basalt plateaus took over 1,000 years to cool and form. It is important to remember that this landmass was connected to another landmass in those days so the lava flowed into a river, the river dries up. Extreme heat penetrates onto the basalt and forces it to crack in angles. Over time with this heat these angles form pentagonal shapes. The first shapes. Millions of years later the great vault line of the planet separates the landmass here and a great divide opens the seas. The sea water further erodes these shapes into columns, 40,000 of these columns. And that is what makes this place so unique. Look out for the shapes that are also formed from the volcanos, locals have many names for these shape: The 2 humped Camel, The Statue of Liberty, The Cathedral, The Eye, The Giants Boot. Enjoy counting the sides on the columns and spotting the volcanic bulbous shapes. 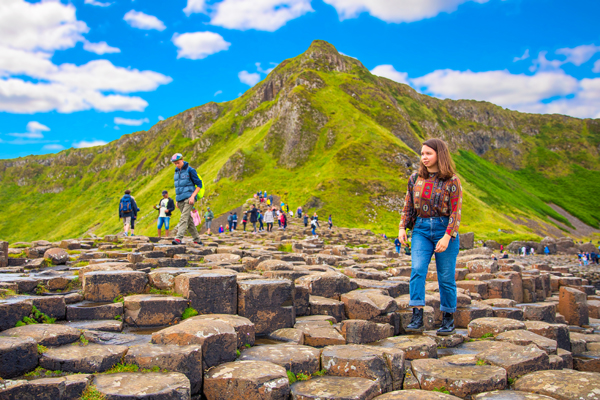 We are very lucky on this island because sometimes the way the rocks are shaped, the way mountains divide, the way valleys fall or the shapes and form the land takes, inspires great stories and tales. Many of these stories were written down over 1,000 years ago in Irish and only translated into English about 150 years. You understand how geologists explain this place but the real story begins;

1000’s of years ago in a time before man governed the land. A time when the land was governed by great giants…

The heroic warrior Finn McCool, also known as Fionn mac Cumhaill, having grown old and weary decided to settle on the scenic northern Antrim Coast line. He grew bored in his old age and decided to build a stairway/roadway all the way to Scotland. Causeway is an old word for roadway. Upon arriving there, he encountered another giant called Benandonner and having observed the great sight, height and strength of Benandonner resolved to go back quietly to Ireland and live in peace.

Benandonner was the largest and mightiest of all the giants and his footsteps could be heard from miles away. It was so loud Finn had to put seaweed into his ears to drown out the thunderous noise.
In panic, Finn turned to his wife Oonagh and said, “Oonagh, what shall we do because this is sure to be the end of me.” Oonagh made a plan and told Finn to build a baby cot. He didn’t fully understand what her plan was but like a good husband said, “yes dear.” In the meanwhile, Oonagh knitted a baby’s bonnet that would fit Finn and told Finn to get into the baby’s cot and make as if he was asleep.

Upon arrival, Benandonner knocked on the door – KNOCK KNOCK KNOCK. Oonagh opened the door and was taken aback by his great size, but did not show it. Benandonner said, “I am here to challenge Finn McCool to fight with honour to death.” Oonagh casually invited the giant in, who had to stoop down to fit into the small home and sat on two chairs.

Oonagh explained “My husband is down the country busy fishing for the great Salmon of Knowledge but if you would like to come in for water and bread, you can wait until his return”. Benandonner was surprised by the casualness of Oonagh’s attitude, but was nonetheless determined to fight. He stomped around the house. In the corner of his eye he caught sight of the baby. He stood over the cradle and began to think ‘if this is the size of Finn Mac Cools baby, then what does Finn look like.’
Oonagh presented bread and water to Benandonner. She cleverly put an anvil in the bread that she served up to the giant and gave a small piece to the baby Finn who happily ate it. Benandonner bit into his and broke his teeth.

Having realised the baby very casually ate the same bread with no injury to himself, Benandonner thought again. This time he realised that Finn must be by far, the largest giant on all of the islands. He vowed to end his challenge and never return. With that he put a spring in his step, bent his head under the door and ran all the way to the causeway. As he crossed the causeway he pulled up every stone column that made up the stairway, to ensure that Finn would never follow him. He returned back to Scotland destroying the causeway as he walked. This is how Oonagh saved Finn’s life and peace between giants settled on the northern islands. 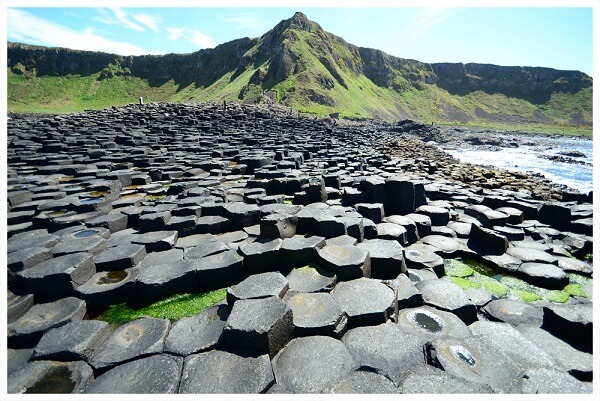 To access the Giants Causeway, you have a choice of walking down to the causeway from the visitors centre (entrance is not included) or you can take the local bus service for an additional one pound. We would recommend you take the scenic walk down and take the minibus back to the visitor’s centre, if you are under time constraints. It takes about 20 minutes to walk down.

Visit the Giants causeway with us!!